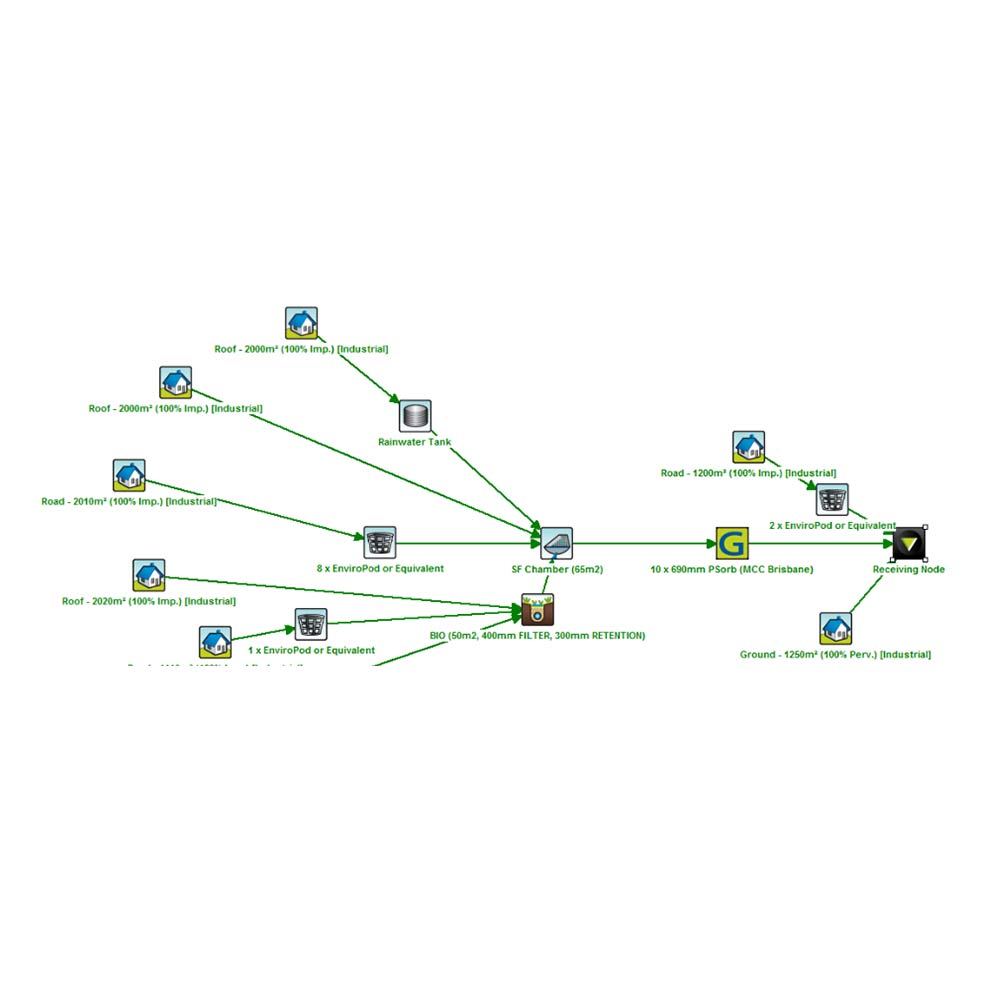 MUSIC Software enables the evaluation of conceptual stormwater management designs to assess how appropriate they are likely to be if used in their proposed catchments. By simulating the proposed stormwater improvement measures, this software can also determine if the proposed systems will ultimately meet the specified water quality objectives. This software simulates water sensitive design, which allows for much easier design and assessment of WSUD in urban developments.

As a reliable method of predicting the performance of stormwater systems, MUSIC can simulate any size catchment area including urban systems from a single dwelling regional and suburban and even entire towns and cities.

Many organisations from catchment management groups to local councils and governments have introduced aquatic environment protection initiatives within urban areas. While initially the main focus was on pollution sources, attention is now on reducing the amount of pollution in urban stormwater, which has been recognised as a major urban pollutant carrier.

The MUSIC software can simulate the use of a wide range of real-world treatment devices, such as:

These vegetated stormwater filtration systems remove soluble contaminants and particulates via a sand or soil-based medium.

These are unvegetated infiltration systems which have no underdrain that assist with removing contaminants.

These are mesh-like devices which are designed for the removal of suspended or floating rubbish or other types of debris that are above 5mm in size.

Vegetated swales are open channels which primarily utilise vegetation for the removal of suspended solids.

Open water bodies such as ponds and basins act as temporary stores which will ultimately allow suspended solids to settle.

Domestic water storage which enables the roof runoff to be captured, stored, and used whenever needed, after contaminants have either been stopped before storage, settled inside the tank, or removed during use of the water.

Since the software was first developed in 2001, MUSIC has been successfully utilised by thousands of working professionals throughout Australia. Contact Ocean Protect today to find out more about the MUSIC stormwater modelling program.

Stormwater Treatment: Why Is It Needed & Methods For Achieving Clear Water

Every time there is a storm, stormwater makes its way across the land, and as it travels, it picks up…
Read More

Every time it rains, our waterways are at risk of flooding. And we’re not just talking about flooding of the…
Read More

What Is Stormwater Management?

Stormwater management is when stormwater runoff is managed for the purpose of quantity and quality control. Any precipitation that falls…
Read More

What are Stormwater Quality Improvement Devices (SQIDs) & how do they work?

When prevention of pollutants entering the stormwater drainage system is necessary, Stormwater Quality Improvement Devices or SQIDs are required to…
Read More