This project was designed by FMG Engineering. The approximate site area of the development is 66,000 sqm which is being treated by a precast StormFilter Vault system and some small raingardens in the car park. The site is predominantly made up of roof and car park areas hence Enviropods have been used as the primary form of pre-treatment to capture key pollutants such as suspended solids with a 343kL rain water tank pre-treating the majority of roof. The precast vault designed by us incorporated an internal bypass arrangement that eliminated upstream bypass pits simplifying the drainage arrangement for the builder. Furthermore, the vault was designed to cater for 4 metres of fill over the top of the system.

The StormFilter system is designed to achieve an annual maintenance frequency with EnviroPods to be serviced every 3-6 months. 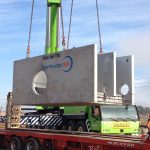 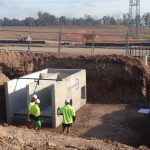 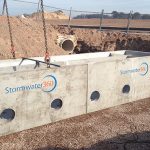 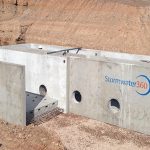 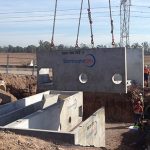